If you have information about this case you may submit a tip anonymously at 979-775-TIPS, brazoscountycrimestoppers.org, or the P3Tips mobile app.
TIP HOTLINE: 979-775-8477
For emergencies call 911

How does it work? 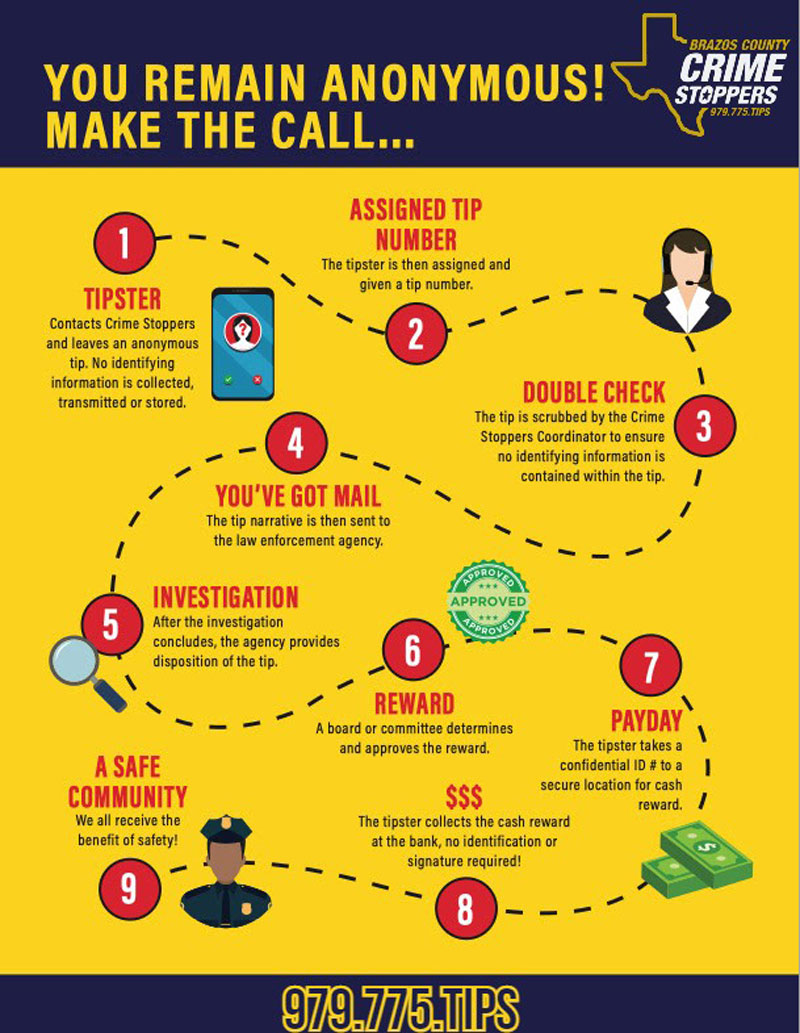 These steps are followed for both community-based tips and for tips about school-related incidents.

How is Crime Stoppers Funded?

The Crime Stoppers program is funded by private donations and fund raising. NO TAX DOLLARS are involved. The reward money paid out by the program is from the fund raising and donations from concerned citizens and businesses. Texas law (TGC 414) also allows certified Crime Stoppers organizations to receive funds in the form of payments from defendants placed on community supervision and money in the form of repayments of rewards. These funds must be used to pay rewards to tipsters.

A community board of directors, made up of persons from throughout the area, meets on a monthly basis to evaluate arrests and to decide on the size of rewards to be paid, up to $1,000. Rewards are then distributed in a private manner to the callers. Callers are eligible for rewards up to $1,000, but, despite this, many callers choose not to collect their rewards.

What does anonymity mean?

Anonymity is when no one knows who you are and never knows who you are. Anonymity is not the same as confidentiality. Confidentiality means that your identity is known but isn’t shared with anyone. State law protects the anonymity of tipsters – no identifying information is collected and the content of the tip cannot be shared with anyone other than those investigating the tip. The tipster cannot be compelled to testify in court and the content of the tip cannot be introduced as evidence. Crime Stoppers does not collect any information about the tipster, where they are calling from, what IP address they are using, and actually removes any information from a tip that may possibly identify who submitted the tip.

Tell me about Rewards.

Always follow-up on a tip to share additional information, check the status, or check to see if you have received an award. Your tip is eligible for a reward only if it is new information that is corroborated and leads to an arrest.

Rewards from Brazos County Crime Stoppers are considered for approval by the Board of Directors the third week of each month after an arrest is made based on the tip. Keep in mind that sometimes it takes a while to investigate a tip, so please be patient but check back regularly.

If you are approved for a reward, you will be notified via your tip – on the web or mobile form or via telephone (you must call the tip line to follow-up because we have no way to reach you). If you have received an award you will receive instructions regarding how and where to pick up your reward. Even when picking up your reward you never give your name – you’ll use your original tip ID number and a new code given to you as part of the instructions to pick up your reward. REMEMBER: You MUST have your original tip ID number and password and the tip must lead to an arrest to be eligible for a reward. If you do not have the tip ID number and password, we cannot verify that the person calling to claim the reward or checking through the web or app is actually the same one who submitted the original tip information. These steps are taking to protect the tipster’s anonymity and keep anyone else from claiming their reward, should they receive one.

A Crime Stoppers Program in the School allows students to anonymously report acts of bullying, violence, unusual behavior, weapons, drugs, stolen property, self-harm, and other felony and misdemeanor crimes through a tip line, website, or app that is truly anonymous. This:

The process for submitting tips is much the same for the school community as it is for the larger community. These tips and tipsters enjoy the same promise of anonymity and protections provided by Texas State Law. Tips must be information about incidents that happen on campus or at a school-sponsored program or include threats against school facilities, students, or staff. One big difference between the school program and the community program is that, in addition to criminal activity that happens in schools, state law allows for school tips to also include information about violations of school rules and concerns about students who are exhibiting signs of depression and/or are threatening self-harm.

The school tip line is NOT for victims to make reports of harm against themselves. The anonymous nature of tips means that the name of the tipster (in this case, the victim) cannot be revealed in the tip and thus they cannot be helped. Students who experience threats, harm, or other problematic behaviors from others should report this to the school office, a teacher, counselor, School Resource Officer, or other trusted adult so they can get help in a timely manner.

A tip is NOT a substitute for calling 9-1-1 in an emergency. In the case of an emergency, 9-1-1 should be called as tips take varying amounts of time to be processed and an immediate response time cannot be guaranteed.

The answer is quite simply yes. Since the start of Crime Stoppers, many calls have been received resulting in thousands of arrests and recovery of substantial amounts of property. Calls have included information about murder, robbery, rape, assaults, drug and firearm offenses.

The success of a Crime Stoppers program cannot be purely judged on statistics, however, other benefits have come to notice:

Crime Stoppers is definitely here to stay. It has been accepted by police as a valid and effective investigative tool and the public, through its overwhelming response, appears to have accepted it as a more palatable alternative to traditional methods of giving information.

What is the history of Crime Stoppers?

When a young college student, Michael Carmen, was shot to death during a robbery at an Albuquerque, New Mexico gas station in July 1976, Detective Greg MacAleese had no idea who was responsible for the killing. No witnesses came forward and it appeared the senseless and brutal shotgun slaying would remain a mystery.

MacAleese, who worked for a newspaper before joining the Albuquerque Police Department, knew something innovative would be necessary to encourage the public to get involved and help solve the murder. He conceived the idea of producing a video re-enactment of the homicide, guaranteed anonymity for anyone who was willing to call him with information and put up a reward from his own pocket to encourage someone to provide a lead that would help identify those responsible for the murder of Carmen. It seemed almost unnecessary to take such extraordinary steps to solve the killing of Carmen. It was a case that should have outraged the community and brought forth many witnesses.

Carmen was only two weeks away from getting married and had taken an extra shift at the gas station to give a co-worker the night off. When police responded to an emergency call they found Carmen gravely wounded. He's been shot in the abdomen at point blank range with a 12-gauge shotgun. The medical staff kept him alive for four hours and during that time he tried to tell detectives who was responsible, but he just didn't have the strength to form the words.

At that time Albuquerque had one of the highest per capita crime rates in the country and people were afraid to help the police.

MacAleese plan to identify those responsible for killing Carmen worked. Within a few hours after the recreation of the murder was broadcast on television station KOAT, he received a phone call. The video image had triggered the memory of a person who heard a loud bang in the vicinity of the gas bar and then saw a car driving off. The caller told MacAleese the vehicle belonged to a resident in a nearby apartment complex. Through investigation MacAleese and a team of detectives arrested two men within 72 hours and charged them with the murder of Carmen and a string of armed robberies.

MacAleese received other calls following the reenactment, including one that allowed police to solve the rape of a young woman. Realizing that this type of program might be useful in fighting crime, MacAleese convinced the Albuquerque Police Department to allow a group of citizens to establish the first Crime Stoppers program.

For his efforts Detective MacAleese was named one of the people in the 1970's who changed the face of the United States and was also named the country's Police officer of the Year. It's also interesting to note that since adopting Crime Stoppers Albuquerque's crime rate has dropped significantly and no longer is ranked in the list of 20 cities with the highest per capita crime rate.

How can I become part of the team?

Thank you for your interest in Brazos County Crime Stoppers, Inc.

Brazos County Crime Stoppers, Inc., a 501(c)(3) non-profit organization, is designed to work collectively with the community, media, and law enforcement to help prevent and solve crime. The program accomplishes this by offering anonymity to persons providing information about crimes and wanted fugitives. It also pays rewards when the information leads to a confirmed arrest. Many people fear reprisal, have an attitude of apathy, don't know what they know, or are just reluctant to get involved. This program takes these concerns away.

Another strong point about Crime Stoppers is that the program is funded through donations, fundraisers, and court fines and fees. No tax payer dollars are used to operate the organization, leaving the Board of Directors, comprised of members of the community, in full control of the organization and its endeavors.

If you want to become part of our team, please click on the link below and read through the Brazos County Crime Stoppers Prospective Member Information Packet, then print and complete the application and email or fax it back to us at the email address or fax number shown at the top of this letter.

Now you can submit anonymous tips from our free and secure mobile app. Search your App Store for "P3 Tips" or click the appropriate link below. 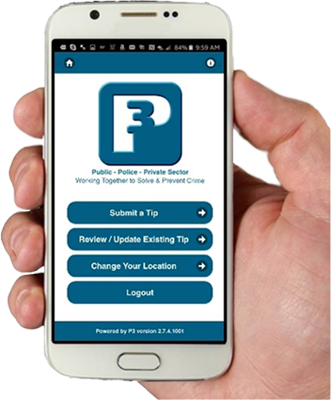